What Is Pachinko and How to Play it? Pachinko parlours are a common sight in Japan, and you can also say a common “sound”. The tell-tale rattle and jingle of the game and its many steel pachinko balls can usually be heard from a long way off and is as a familiar everyday sound to most city and urban-dwelling Japanese people as any.

Gambling is highly regulated in Japan and there are no casinos. However, a few forms of gambling are permitted, such as certain sports betting, the national lottery, and then there’s pachinko. Pachinko is by far the preferred form, so much so that it in recent years it has been reported to make up more than 4% of Japan’s annual GDP!

Pachinko is similar to pinball in that it involves launching a steel ball into a sort of “obstacle course” with lots of flashing lights and exciting visuals, music and sounds, but instead of being laid out horizontally, like pinball, pachinko is played vertically. Also, instead of one ball being used, in pachinko, many balls, potentially as many as one can afford, are continuously fed into the machine by the player. These are then propelled by a special lever to the top of the machine where they begin to fall through a special grid-work pattern of pins, pockets, and baskets, creating their trademark “jingle” along the way.

The idea is that by launching lots of balls into the machine, some will fall through, and others will inevitably land in the pockets and baskets. These will either award the player with more pachinko balls, give some sort of bonus, or perhaps launch the player into a fun and exciting mini game of some sort. Either way, the end goal is to win more pachinko balls then you started with.

Afterwards you can redeem your winnings for certain prize items offered by the pachinko parlour. These can range from simple items like sunglasses or a bottle of sake, to more valuable items such as iPhones and laptops.

Some pachinko players, however, prefer to utilise special prize tokens offered by certain pachinko parlours, that can be converted to cash by off-site vendors. This is thanks to a certain loophole in Japan’s laws, which otherwise doesn’t allow cash gambling.

The similarities of pachinko with pinball are no coincidence, as they both have a common ancestor, a certain game called “Bagatelle” that was popular in Chicago, USA, in the early 1900s. It was a particular simplified children’s version of Bagatelle, however, called the “Corinth Game”, shipped to Japan during the 1920’s, that was destined to evolve and become the pachinko we know today. 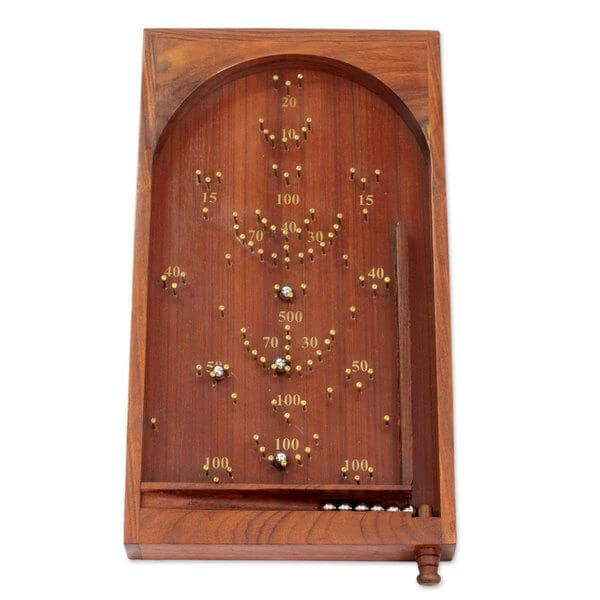 Originally nicknamed “Pachi Pachi” a Japanese reference to the “jingle” sound, and initially used solely to attract kids to sweet stores, it soon caught on with adults, and over the years, eventually became somewhat of a national obsession.

As decades past and Japan became more advanced in technology, pachinko, like slots machines in the western world, became, first electronic, and then ever more sophisticated, and digital, until eventually it bloomed into the highly popular arcade-style Japanese gambling that it is today.