Let’s Take a Look at the Details about Video Poker

It was not until the prices of television units and the prices of solid state processors dropped to lower levels that the idea of video poker became something that various companies considered commercially viable. It was in the middle of the 1970s that the first video poker models started to appear. They were very simplistic and almost rudimentary by today’s standards, but for the time they were state of the art and created a lot of buzz in the gambling and poker communities.

In 1979, a company called Si Redd’s Coin Machines made a game called Draw Poker. Si Redd’s Coin Machines eventually evolved into a company that many know today. That company is International game Technology. During the 1980s, poker played on video screens saw a huge jump in popularity among gamblers and in casinos. Because there were no real life players involved besides the person playing on the video screen, it was a much more approachable option for new players and players who not as confident in their skills. The prospect of playing with real people, some of who might be poker experts, when you yourself are a novice is not something that most new players would be comfortable with.

Today, video poker is a very popular form of the classic card game. It has seen much success on the Las Vegas strip where people often go for machines with better odds and lower pay ins. This isn’t always the case though. Some casinos have actually been raising the prices of these machines in order to make them more profitable. Some of the machines are twenty five cents or more per play.

In the United States, these machines are regulated differently from state to state, or they are regulated by the Native American gaming agencies. Both of these state that the machines have to deal from a virtual deck and that the sequences in which the cards come out have to be completely randomised. 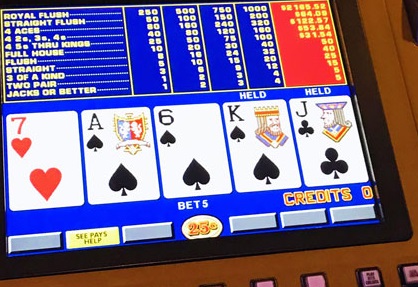 Once the player has put in their money, they place a bet on a single or multiple cards on the screen. The player then pushes the deal button and waits to be given a total of five cards. This is when the player has the opportunity to get rid of one or more of their cards and get new cards to replace the ones they’ve passed along. These new cards are given from the same deck as the original. Once the draw has taken place, the machine will then pay out if the player has a winning hand that’s shown in the pay table.

A pay table is a list of payouts that is shown on either a slot machine or video poker machine. The amounts paid out will vary. They are based on how rare the hand is as well as how the player played his cards and the variation of the game. Not all combinations that could win in a poker match will win the player money.

For instance, a pair of twos might not pay out on a machine. It is not unusual for a pair of jacks to be the minimum a player needs in order for the machine to pay. This combination will sometimes just pay the player back with even money. The rest of the hand combinations are the same as if they player was playing in a normal poker game. These include things like a straight, flush or royal flush.